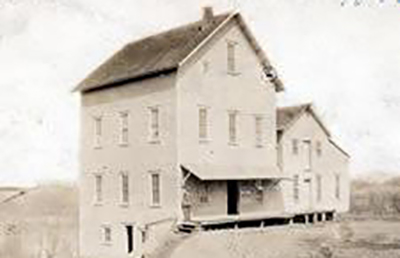 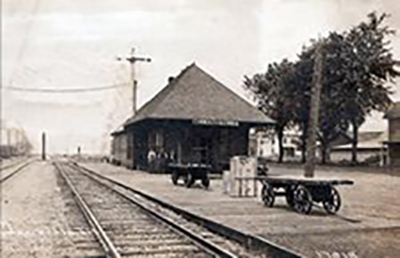 The Building of 'Old Town'

After the Mill was built in 1834, people began to settle here, with homes being built on both sides of the road going west from the mill to what is now Route 40. "Old Town" was settled on the four blocks going west of Route 40. Old Town's Main Street is now called Old Mill Road. Main Street consisted of several general stores, two hotels, a livery stable, a shoe shop, taverns, a pool hall, several blacksmiths, a bank, a post office and several other businesses the people of Old Town needed to function.

The town pump was located in the center of the intersection of what is now the Polo blacktop and Route 40. Families hand pumped water for drinking and household purposes. and a large tank provided water for horses and other animals.

By 1886, the town fathers raised $16,000 to encourage the Chicago, Burlington and Quincy railroad to build a track through Milledgeville.

The Building of 'New Town'

The railroad was completed and trains were rolling through Milledgeville by 1886. The new depot was a busy place. People could travel easier, and Milledgeville opened itself up to the outside world. Businesses could purchase supplies at a lower cost. A second business district developed along the two blocks north of the tracks. New two-story brick buildings were built as well as several smaller wood frame buildings. Oil burning lamps were added to each street corner for the convenience of customers. As "New Town" grew, Old Town began to lose businesses. The two hotels, a livery stable and feed sheds were moved north of the tracks to take advantage of the increasing business opportunities. A newspaper article printed in 1887 said, "If Milledgeville isn't happy now, she never will be."

Milledgeville Public Library began the Milledgeville History project in June of 2006. It began with a large collection of photos and articles belonging to Bernie Hawkins, father of Lois Simmons. These were organized and placed into archival quality displays and are available for community viewing at the Library. We also welcome donations of old photos, newspapers or other items pertaining to the history of Milledgeville.

The Village of Milledgeville, IL, is an equal opportunity employer.